What's on your mind?

I know I said I'd wait for the Limited Run copy (I'll still get it) but I saw that it was only $10 to get it digitally on PS4.

Barely into it and the only problems I've had are with the cursor. It locks onto things that can be interacted with, whereas the original version gives the cursor free range at all times. Especially frustrating when doing the shooting range. And the cursor is way too damn slow in the Esper. So I hope they do something about that. Otherwise, it seems okay so far.

EDIT: Turning down 'Smoothing' in Input Options fixed this!

Not making this post an announcement since there's been no official word (I'm only posting this because Bloody Disgusting generally seems reliable, though I'm not sure about the Try Hard Guides post they link to), but it looks like we may get a new Blade Runner video game.

Ideally, I've always felt that something like L.A. Noire would be very fitting for Blade Runner, but I suppose we'll see what happens, if this is true.

Near the end of Origins #12, Cal indicates that his ideal Blade Runner is one that will eventually break and begin fighting for the replicants. The top and bottom panels are clearly nods to Deckard and K, respectively, but I don't recognize the one in the middle. It doesn't look like Ash or Joseph, so we've run out of options for Blade Runners who become sympathetic toward replicants. That is, unless we consider Ray McCoy (I suppose it could look like him), but his allegiances are player choice, and the image in the panel doesn't immediately connect to him, unless I'm forgetting something.

So who is it? The only other possibilities I can think of is either just a generic representation of a Blade Runner or someone we haven't met before (possibly from an upcoming comic?). 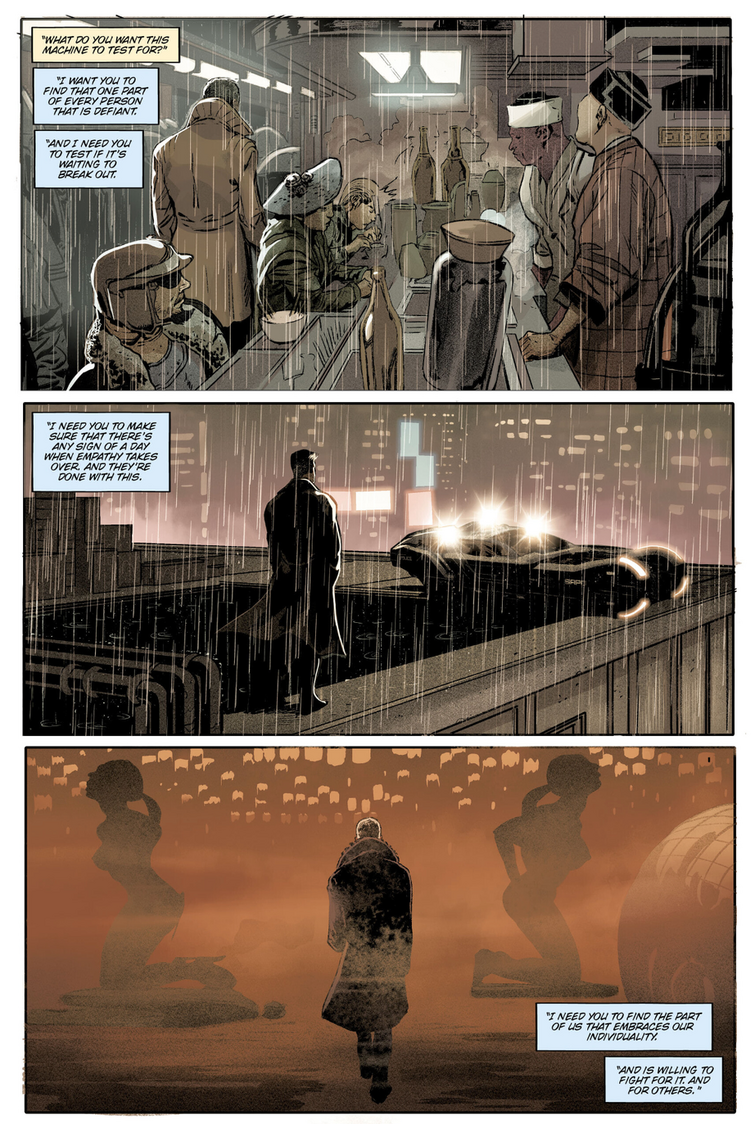 Still looks like there's no solid release date (though the trailer during Limited Run Games' stream inexplicably said 'available now'), but pre-orders for the physical editions are opening in a few weeks, so I imagine it'll be out within a few months. I was afraid that this had been quietly canceled. 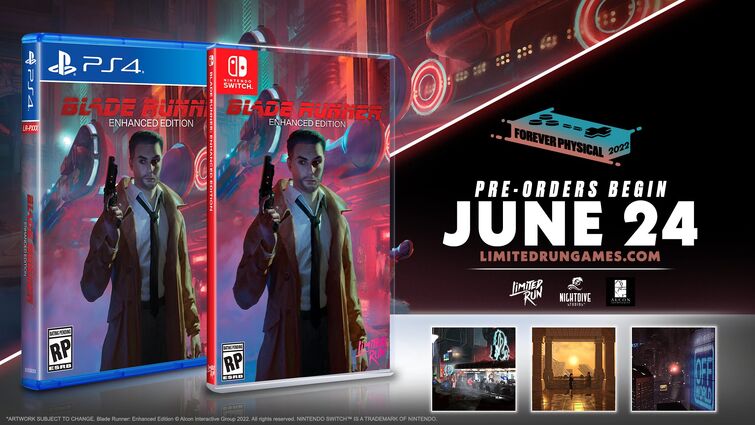 While most places online seem to attribute the claim to David Peoples (who co-wrote BR and the script for Soldier), if this article is indeed ground zero, the claim comes from Soldier's director, Paul W. S. Anderson, who has no connection to BR, but refers to Soldier as a "sidequel" to BR, and personally considers it belonging to the same universe. It continues with Soldier's production designer (who was art director for BR) David L. Snyder referring to Soldier as an extension and sibling film to BR, and that BR was a primary inspiration for Soldier's design. Beyond this, nobody else is quoted about any connection between the films. I will post a picture of the relevant section of the article at the bottom of this post.

So, I cannot find a source of David Peoples saying he wrote it intending a connection to BR. I personally don't doubt that he did so, or else I feel like he probably would have said otherwise by now. I unfortunately can't find any interviews where he discusses Soldier; most interviewers (rightfully so) ask him primarily about BR and Unforgiven. I have found that someone is making an independent documentary about Soldier and has interviewed Peoples, so I hope that is completed.

Now, although I've seen little to no opposition to Soldier's inclusion on this Wiki, I think it's best to pose the question of whether it should continue to be included. While it has never been officially stated to be set in the Blade Runner universe, it has never been contradicted out of canon. It is in its own separate continuity section simply because it's never been official. Personally, I am fine with keeping it this way, but if anyone has other thoughts about it, please speak up. And if you manage to find a source of David Peoples himself commenting on the connection between Blade Runner and Soldier, please share it!

Here is the relevant snippet from the Cinescape article, by Beth Laski: 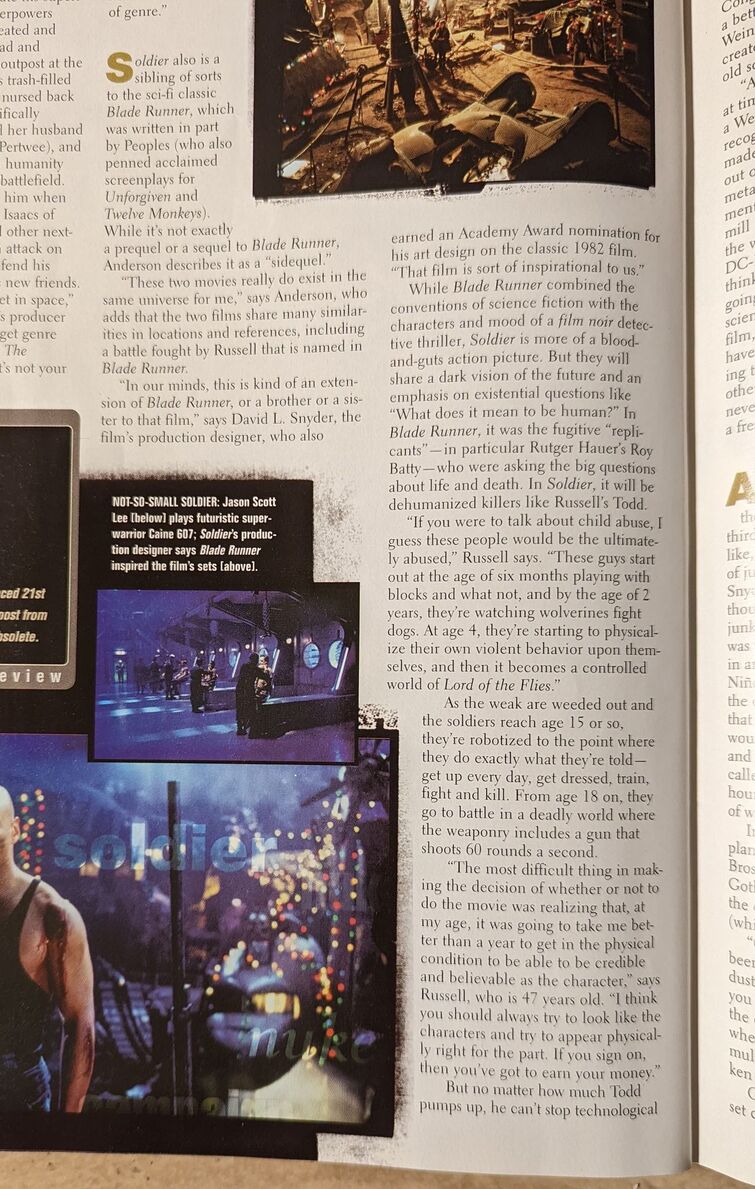 Are there comics of this franchise and if so are any of them motion comics?

Unfortunately I'm unable to support it - no early-access PDF for me :( - but it seems to have already far exceeded its goal!

The upcoming tabletop RPG's Kickstarter will launch on May 3, with the game set for a Fall release!

I probably won't be able to contribute a whole lot, but I plan to back it myself.

The BLADE RUNNER RPG Coming To Kickstarter May 3rdmailchi.mp

I didn't expect to see Elle's story continue so soon! It is only four issues long, though.

Going to use this thread to give my own thoughts on the K.W. Jeter novels as I work through them so that their missing info can be added to the Wiki.

This is my second time through The Edge of Human. I started Replicant Night several years ago, but dropped it pretty quickly, probably in favor of something better. I have never read Eye and Talon before, so that'll be fun.

If you have your own thoughts on these books, please share them as well! Spoilers ahead for anyone who cares.

Could this be an indication that we're getting future seasons of the show? I hope so. I think there's a lot more potential for this show going down the road. Guess we'll see.

Do we know from the expanded lore of replicants if they can gain other abilities or is it always just going to be enhanced strength, agility, endurance and intelligence? Im not asking for far out supernatural stuff and psychic powers but like if they can develop bulletproof type skin/body, shoot out fire from their hands, things like that.

Im just curious do we know from interviews, deleted scenes, even the original book the movie based on, do we know anything more about the other two replicants who died on nexus 6, I think we know one is a male and other female but do we know of their names, personalities, etc.

Right on the heels of Blade Runner 2039's confirmation, the television series Ridley Scott teased months ago has been announced as Blade Runner 2099.

Thoughts, anyone? I'm not sure if (m)any characters from the films will appear since it's 50 years after 2049.

The last panel of Blade Runner 2029 confirmed that Ash's story will be concluded in another series, Blade Runner 2039. I would link an article, but it doesn't look like there are any yet.

Anyone have any thoughts? Maybe Elle will show up since it's evidently set seven years after Black Lotus?

Please share your thoughts on the finale and the series as a whole!

All the Best Memories

Thoughts on this week's episode?

Thoughts on this week's episode?