Blade Runner: The Roleplaying Game is an upcoming tabletop roleplaying game by Free League Publishing, set to release in Fall 2022. The game's budget was crowdfunded through Kickstarter, with its goal being reached within minutes.

Players are given the choice to play as either a human or replicant Blade Runner. However, there are plans to open up other professions to the player over time.

The game focuses on investigations, moral choices, and character development, and as such, uses the Year Zero Engine with just two dice. The mechanics are designed to support gameplay without requiring too much of the players' attention.

The game features a stress mechanic, similar to the horror mechanic used in many Free League Games. A character that builds up too much stress will eventually break and react in unpredictable ways. To relieve stress, characters need downtime.

The core structure of the game is based on case files. These are stand-alone modules which take a few full sessions to complete. The official case files published by Free League will be connected in various thematic ways, offering a possibility to play out longer narratives. Some of the files are open-and-shut cases, while others have longer lasting implications.[1]

The developers chose 2037 to be the time period so that they could draw from elements of both films.

The game relied on funding from Kickstarter, designed to end by May 26. By May 9, the game was already fully funded.[1] 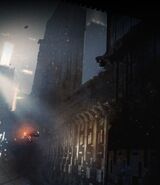