Blade Runner is a video game loosely inspired by the 1982 film Blade Runner, but actually based on the film soundtrack by Vangelis as the publishers were unable to obtain a licence for a film tie-in. The game was published in 1985 by CRL Group PLC for Commodore 64, ZX Spectrum and Amstrad CPC. Reviews of the game were average at best.

The game is "inspired by the Vangelis soundtrack" of the 1982 Blade Runner movie. The publisher was unable to obtain rights to the actual movie, so the game was instead said to be based on the soundtrack. The inlay stated that it was a "video game interpretation of the film score".

A combat team of 24 Replidroids has arrived on Earth. Their mission to destroy their creators and so end the slavery imposed upon Replidroids race.

You are bounty hunter employed by the police for solo purpose of retiring Replidroids. You start the game in police HQ in center of the city. In front of you is control panel for your skimmer - flying car.

The game features the player character hunting down replidroids for bounty money. On loading the game, the player has to listen to around two minutes of music from the movie soundtrack without any ability to skip the sequence. Author Will Brooker notes that due to the computers' sonic limitations, the "grandiose swoops and fanfares" of the soundtrack were reduced to "a tinny one-channel burble".

The game first presents the player with a map showing the locations of the fugitive replidroids and the player's flying car, which must be steered over a droid on the map. At this point the game switches to a side scrolling game in which the player must avoid crowds and cars whilst in pursuit of the replidroid. As the levels increase, so does the level of the replidroids. The first level droids are slow and stupid, but the sixth level ones are faster than a human. 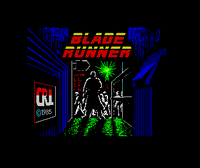 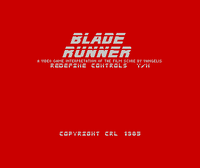 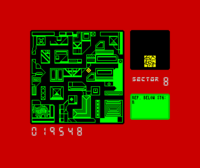 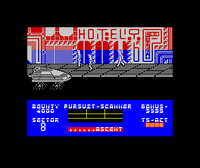 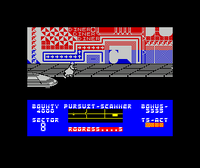