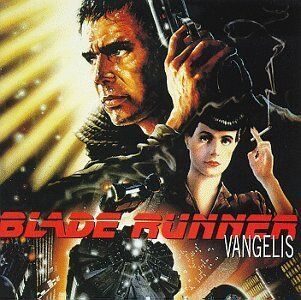 The soundtrack for Blade Runner by Vangelis is a dark melodic combination of classic composition and futuristic synthesizers which mirrors the film-noir retro-future envisioned by Ridley Scott.

Vangelis, fresh off of his Academy Award-winning score from Chariots of Fire, composed and performed the music on his synthesizers. The musicscape of the 2019 was created in Vangelis' "space" mode of new age music, as heard on such albums of his as Heaven and Hell. He also made use of various chimes and the vocals of collaborator Demis Roussos. Ridley Scott also used "Memories of Green" from Vangelis' album See You Later (an orchestral version of which Scott would later use in his film Someone To Watch Over Me).

Despite being well received by fans and critically acclaimed – nominated in 1983 for a BAFTA and Golden Globe as best original score – and the promise of a soundtrack album from Polydor Records in the end titles of the film, the release of the original soundtrack recording was delayed for over a decade. There are two official releases of the music from Blade Runner. In light of the lack of a release of an official score, an orchestral adaptation, recorded by The New American Orchestra, was released in 1982. Some of the film tracks would in 1989 surface on the compilation Themes, but it wasn't until the 1992 release of the Director's Cut version of the film that a substantial amount of the score would see the light of day on an official release.

The first official release (on LP, tape and CD) was a reinterpretation by the New American Orchestra in 1982. Billed as an "orchestral adaptation of music composed for the motion picture by Vangelis" this release consisted of jazz-inspired, orchestrated renditions of the major tracks from the film, but not the original score tracks.

In 1989 the Vangelis "Themes" Collection LP was released. This compilation featured compositions from a variety of Vangelis film scores, including three tracks from Blade Runner.

In 1994, an official recording of Vangelis' score was released by Warner Music. This release had extensive liner notes in a twelve-page booklet, but the closest Vangelis came to explaining the long delay was the following:

Most of the music contained in this album originates from recordings I made in London in 1982, whilst working on the score for the film BLADE RUNNER. Finding myself unable to release these recordings at the time; it is with great pleasure that I am able to do so now. Some of the pieces contained will be known to you from the Original Soundtrack of the film, whilst others are appearing here for the first time. Looking back at RIDLEY SCOTT's powerful and evocative pictures left me as stimulated as before, and made the recompiling of this music, today, an enjoyable experience." (VANGELIS Athens, April 1994)

While most of the tracks on the album are from the film, a number were composed by Vangelis but were ultimately not used in the film itself. Other compositions that appear in the film were not included on this release. Many do not consider this to be a satisfying representation of the score.

The delays and poor reproductions of the Blade Runner score led to the production of many bootleg recordings over the years. A bootleg tape surfaced in 1982 at science fiction conventions and became popular given the delay of an official release of the original recordings, and in 1993 "Off World Music, Ltd." created a bootleg CD that would prove more comprehensive than Vangelis' official CD in 1994. A disc from "Gongo Records" features most of the same material, but with slightly better sound quality. In 2003, two other bootlegs surfaced, the "Esper Edition," closely preceded by " Los Angeles - November 2019 ." The double disc "Esper Edition" combined tracks from the official release, the Gongo boot and the film itself. Finally "2019" provided a single disc compilation almost wholly consisting of ambient sound from the film, padded out with some sounds from the Westwood game "Blade Runner." The Gongo release is considered the best presentation of the music, while Los Angeles - November 2019 and the Esper Edition are excellent mementos of the film.

The first release of the Blade Runner score in any form was a tape suspected of coming from a sound engineer during the film's mixing. It was popular, despite subpar audio quality, given there were no plans to release a Vangelis score.

A second bootleg Original Motion Picture Soundtrack: Blade Runner appeared in 1993 by "Off World Music, Ltd." on CD, which was of high quality and actually more comprehensive than the official release by Vangelis in 1994.

This release includes a 1939 recording by R&B group The Ink Spots. "If I Didn't Care" which originally appeared in an early workprint of Blade Runner, but was replaced by the Don Percival cut "One More Kiss, Dear" in the final version. [edit]

In 2005 a bootleg – Blade Runner (Esper Edition) – was created which provides a comprehensive Blade Runner soundtrack. It contains some background music that has never been released.