Blade Runner Black Out 2022 is a neo-noir cyberpunk anime short film prequel directed by Shinichirō Watanabe, that was released on September 27, 2017, serving as a prequel to Blade Runner 2049.

"While the Replicant NEXUS 6 expired in inventory, TYRELL CORP. pushed the series 8 into the local and Off-world market.
The NEXUS series 8 were purpose-built with a natural lifespan.
Soon the human supremacy movements began.
These angry masses used the

In May 2022, the Tyrell Corporation has developed a new Nexus-8 line of replicants, who now possess lifespans equivalent to that of a regular human. This causes a massive backlash among the human populace. Establishing the human supremacy movement, they begin hunting down and killing replicants.

One of these replicants, Trixie, is attacked by a group of thugs but is rescued by Iggy.

At the LAPD headquarters, Gaff and another officer are watching the file of the replicants who escaped Calantha and reluctantly accept the job to hunt them down.

Two weeks prior, Trixie befriended Ren Dus, a human who is a technician at the Tyrell Corporation in charge of launching nuclear missiles. Iggy hatches a plan with Trixie to destroy the Tyrell Corporation's database of registered replicants, so that replicants can no longer be hunted. Iggy reveals to her that he used to be a soldier but deserted when he realized the enemy soldiers he had been fighting and killing were also replicants.

Ren redirects a test missile to detonate over Los Angeles, blacking out the city and wiping out all electronic data. At the same time, Ren and Iggy hijack a fuel truck to physically destroy the Tyrell Corporation's servers. The operation is a success, with the servers destroyed and power to Los Angeles disabled. However, Trixie is killed by security forces in the process. Iggy manages to escape and removes his right eye, the only thing that can identify him as a replicant.

"The Blackout, which led to the prohibition of Replicant production, sealed the fate of the TYRELL CORPORATION.
It took over a decade for THE WALLACE CORP. to win approval to manufacture a new breed of
Replicants."[src] 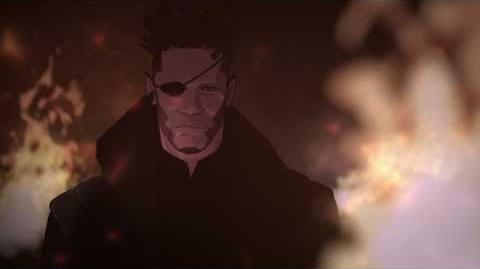