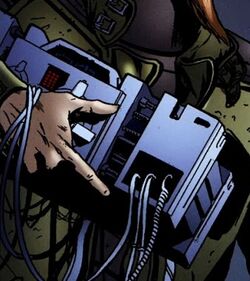 The Boneli Reflex-Arc Test was used by bounty hunter Phil Resch to distinguish androids from humans. Simpler than the Voigt-Kampff Empathy Test, it would detect responses in the upper ganglia of the spinal column, which was microseconds slower in androids.

Resch – who unknowingly worked at a precinct entirely staffed by androids, except himself – believed that the precinct's personnel should have been regularly subjected to the test. However, Inspector Garland opposed this.[1]

When Officer Crams brought in Rick Deckard, who claimed to be a bounty hunter, Resch prepared to perform the test. However, he was more suspicious of Garland. Upon his return, he killed Garland and assisted Deckard in his assignment of retiring Luba Luft.[1]

Retrieved from "https://bladerunner.fandom.com/wiki/Boneli_test?oldid=11940"
Community content is available under CC-BY-SA unless otherwise noted.