Elle was one of a group of replicants produced in the year 2032, designed to be completely subservient to humans.

After surviving being hunted for sport, Elle suffered a bout of amnesia and following her recollection of being hunted, she vowed to find those who hunted her and kill them.

Elle was a replicant manufactured to be completely subservient to humans. After experiencing a memory in which she received a black lotus tattoo from her boyfriend as she lay by a pool, she woke in the same place, but it now appeared dilapidated. She went outside, finding other replicants who, like her, had no recollection of how they got there or that they were replicants. The group was then attacked by a group of hunters and they dispersed, Elle running away with Miu.[1]

As the hunters tracked and killed other replicants, Elle and Miu managed to hijack a hunter's buggy, picking up two other replicants as they were pursued. Elle soon lost control of the vehicle and it crashed, with her and Miu surviving. One of the hunters, Hooper, was left to his own devices with the pair. He tossed a knife to them and urged Elle to attack her, but she was unable to. He goaded her further by killing Miu, then striking Elle with his rifle and kicking her. Elle soon was able to retaliate, getting into a brief fistfight with Hooper. She managed to grab his knife and stab him before taking off with his camera. She then wandered into the desert until finding and boarding a vehicle.[1]

In October 2032, Elle awoke in the back of a transport vehicle with a black lotus tattoo on her shoulder and carrying Hooper's encrypted camera, recalling nothing from her past. She ended up in the city of Los Angeles, but it did not appear to be exactly as she remembered. After a brief confrontation with an angry sushi bar employee, Elle was attacked by a gang in an alleyway and recalled memories of being attacked by Hooper. Much to her own amazement, Elle managed to fend off her attackers.[2]

Recalling the address of her home, she was pointed to a building she did not recognize, aside from a yellow wall in the area with an angel painted upon it. She then encountered Doc Badger, who invited her inside of her shop. While there, she hid as Drove, one of the gang members who attacked her, came in, questioning Doc if he had seen Elle. After Doc did not give Elle up, Drove left and Elle showed Doc the camera. She offered to take care of the gang for him if he decrypted the camera.[2]

Wielding a sword from the shop, Elle tracked down the gang and confronted them, managing once again to overpower them and kill their leader, warning the survivors to leave Doc Badger alone. This prompted her to recall stabbing Hooper and taking his camera. She returned to Doc, who said he was unable to decrypt the camera, but that an upstairs neighbor could. He took her to the top floor, where they found Joseph passed out on his couch.[2]

After Elle woke Joseph by pouring a bottle of liquor on him, Doc introduced them, with Joseph reluctantly agreeing to decrypt the camera. As he started the process, Elle noticed Joseph's television showing a meeting between Senator Bannister and Niander Wallace, Sr., recognizing Bannister as someone who hunted her in a desert. She asked where she could find Bannister, Joseph did not provide any help and she left with the camera.[3]

Making her way to the Pickfair Hotel, seen in the broadcast, she followed Bannister to a spinner. She commandeered a car in order to tail him to a boxing arena, managing to enter and incapacitate the security detail. She confronted him in a private balcony seat and attempted to question him. Bannister told her she was a replicant who had been built the previous week. He then tried to call for help which forced Elle to take action against him. They scuffled for a few moments, with Bannister managing to choke her twice in the scuffle. After recalling a memory of her encounter in the desert, Elle managed to get the upper hand and eventually dropped Bannister off of the balcony, killing him.[3]

She managed to leave the boxing arena, nearly being caught by Officer Alani Davis before being pursued by another officer. She managed to escape him inside an alleyway, but experienced a vivid and upsetting flashback of being hunted in the desert alongside other replicants. She then saw Joseph raise a stun gun and shoot her.[3]

Elle later woke in Joseph's apartment, learning from him that he found her by utilizing a police radio and that he was continuing to decrypt the camera. She then refused a drink from him, which he noted to not taste as good as it did prior to the Blackout. Noting that she is unaware of the Blackout, she ponders whether she truly ever had memories at all.[4]

Later, while watching news coverage of Bannister's death, Elle asked Joseph about replicants. After answering her, Joseph checked her eye for a serial number, but did not find one, indicating she was not a Nexus-8. To be even more certain she was not a replicant, Joseph subjected Elle to a Voight-Kampff test. During the test, she was asked if she remembered ever being in love, causing her to recall her lover who had given her the black lotus tattoo, having noted that it symbolized purity. Joseph then ended the test, reiterating to Elle that she was not a replicant and was more likely to be just suffering from amnesia.[4]

After taking a rest, Elle went to Joseph's computer, finding that the camera had been decrypted. On it, she found Hooper's footage of Bannister and his friends hunting replicants in the desert. Elle became particularly unsettled upon hearing someone in the footage mention that the replicants they hunted – herself among them – were designed to be fully submissive to humans.[4]

After fully recalling the memory in the desert, Elle had an enraged response, beginning to trash Joseph's apartment until he managed to calm her. Coming to terms with being a replicant, Elle vowed to track down her hunters and kill them. She asked Joseph for his help, to which he agreed.[1]

Later, after resting, Elle awoke, wondering why her dreams had become more vivid. Finding a gun in Joseph's apartment, she took it to the roof, shooting bottles with it. However, Joseph soon came, reprimanding her for rummaging through his belongings. They went inside and ate, Elle asking if alcohol would help her forget memories, but Joseph explained it would not, as replicants were incapable of forgetting their memories. She then asked him again to help her, to which he agreed, although he advised she give up.[5]

Elle sharpened the katana from Doc's shop as Joseph examined the footage with an Esper machine, identifying one of the hunters as a cop, evident by the watch he wore. Joseph then received a call and told Elle he was too busy to print off the images produced by the Esper and told her to have Doc Badger do it instead.[5]

Doc later came to Joseph's apartment and printed off the photos for her. Elle then set out for Earl and Josephine Grant's apartment.[5] 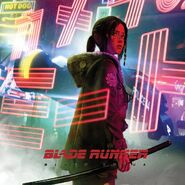