For the police sergeant by the same name, see Esper (policeman) 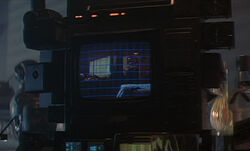 The Esper was a computer used by the Los Angeles Police Department Blade Runner Unit.

Harry Bryant used an Esper while briefing Rick Deckard on his job to retire a group of replicants in November 2019.[1]

In 2023, Blade Runner Harper had a multitool outfitted with an Esper function, allowing him to play back events that had recently occurred in an area.[3]

Ex-Blade Runner Joseph used an Esper machine in late 2032 to examine footage of a "Doll Hunt" filmed by Hayden Hooper. This was done to help Elle, a replicant who managed to survive the hunt and sought vengeance.[4]

The 1982 presskit for Blade Runner describes the Esper:

"A high-density computer with a very powerful three-dimensional resolution capacity and a cryogenic cooling system. The police cars and Deckard's apartment contain small models which can be channeled into the large one at police headquarters. This big apparatus is a well-worn, retro-fitted part of the furniture. Among many functions, the Esper can analyze and enlarge photos, enabling investigators to search a room without being there." Bryant briefs Deckard with the help of an esper and Deckard examines Leon's photos with one as well."