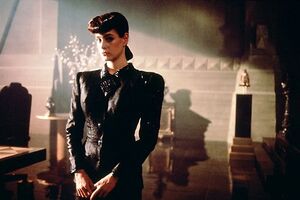 Another issue that permeates Blade Runner is the role of women. This is explored through the treatment and defining of lead female roles, which all happen to be artificial (replicants) and sexualized by the men around them. This gives whole new meaning to the term "objectifying women" since they are manufactured.

Depending on one's view of replicants, she then becomes Deckard's "love interest" or "love object."

The film-noir setting provides further context of the portrayal of women in film, with the femme-fatale historically portraying women as dangerous, uncaring, devious, sexualized and deadly as a reaction to changing roles after World War II. J.F. Sebastian is lured by Pris' sexuality, a naked Zhora catches Deckard off-guard, and then there is the forbidden love with Rachael. Critics may believe Blade Runner misogynist, given that Pris and Zhora can be seen as "strong, independent and non-subservient women" who are killed, whereas Rachael who is the opposite lives.

Arguably, the use of women as victims is meant to elicit sympathy from the audience (a Voight-Kampff test), and moreover can be read as a postmodern critique of the film-noir archetype. In this view, Blade Runner exposes the femme-fatale stereotype as dead. Furthermore, the race of the replicants implies a critique of females in Hollywood films. The replicants become representative not of a battle between sexes, but "between that which is human, and that which is non-human, or to put it more simply, that which is real and that which is not real."