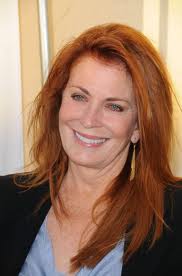 Joanna Cassidy (b. Joanna Virginia Caskey on August 2, 1945 in Haddonfield, New Jersey) is an American actress who has been active in film and television for 35 years.

In 1982, her first major feature film role was as the replicant Zhora in the film Blade Runner. A quarter-century later, she briefly reprised the role when she participated in special effects footage for the Final Cut version of the film, which substituted newly filmed footage of Cassidy for the original footage that showed an all-too-obvious stunt double in Zhora's death scene.

Cassidy got her start guest starring on television series such as Mission: Impossible, Falcon Crest, Starsky & Hutch and Fantasy Island, as well as having starring roles on programs such as 240-Robert and Dallas.

In 1983, the year following her Blade Runner role, she co-starred in Under Fire with Gene Hackman and Nick Nolte. She was also featured in such films as Hollywood Wives (1985), Who Framed Roger Rabbit (1988), Barbarians at the Gate (1993), the 1993 adaptation of Stephen King's The Tommyknockers and Wes Craven's Vampire in Brooklyn (1995).

On television, she provided the voice of Maggie Sawyer in the 1990s animated series of Superman, has had recurring guest roles on shows such as Diagnosis Murder and The District; and has guest starred on Everwood and Star Trek: Enterprise as T'Les, the mother of T'Pol.

Cassidy is also known for her recurring role as Margaret Chenowith on Six Feet Under which she has played for all five seasons, since the show began in 2001. Interestingly, her (now deceased) husband on the show was played by Robert Foxworth, whom she also acted with in episodes of both Falcon Crest and Star Trek: Enterprise.

Joanna was in a famous "Smokey Bear" commercial in 1973 where she tells people to be extra careful in the forest then turns into "Smokey" in disguise and tells people, "if this was me, would you have listened?"

Cassidy has 2 children from her marriage in the 1960s.

Retrieved from "https://bladerunner.fandom.com/wiki/Joanna_Cassidy?oldid=11977"
Community content is available under CC-BY-SA unless otherwise noted.