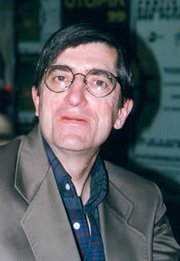 Kevin Wayne Jeter is an American science fiction and horror writer known for his literary writing style, dark themes, and paranoid, unsympathetic characters. Jeter attended college at California State University, Fullerton where he became friends with Philip K. Dick. Jeter was actually the inspiration for the character named Kevin in Dick's novel, "Valis". Many of Jeter's books focus on the subjective nature of reality in a way that is reminiscent of the works of Dick.

Jeter wrote what was likely the first true Cyberpunk novel, Dr. Adder, but it was nearly ten years before any publisher would agree to publish it, due to its violent and sexually-provocative content. Jeter is also the first to coin the term, "Steampunk", to describe the retro-technology, alternate-history works that he published along with his friends, James P. Blaylock and Tim Powers. Jeter's Steampunk novels were "Morlock Night","Infernal Devices" and "Fiendish Schemes".

As well as his own original novels, K. W. Jeter has written a number of authorized novel sequels to the critically acclaimed 1982 motion picture Blade Runner, which was adapted from Philip K. Dick's novel Do Androids Dream of Electric Sheep?. He also regularly writes novels for the Alien Nation, Star Wars, and Star Trek franchises.

He currently lives in Cuenca, Ecuador with his wife, Geri.