The Nexus-8 series were the final iteration of numerically designated bioengineered humans created by the Tyrell Corporation.

After the death of corporate head and founder Eldon Tyrell at the hands of a Nexus-6 model named Roy Batty in November 2019, the rest of the unused or unsold Nexus-6 replicants were allowed to expire in storage.[1]

In 2020, the Tyrell Corporation rushed the next iteration of replicants onto the local and off-world market, the Nexus-8. Unlike the previous Nexus-6 models, Nexus-8 series replicants were purpose-built with natural lifespans and were imprinted with ocular implants to better distinguish them from humans. The Replicant Registration database was created to identify replicants with ease at this time and the Nexus-8s were used to fight on both sides of the Off-world war on Calantha.[2]

Because of the violence associated with the previous Nexus-6 models, the Nexus-8 series were not well received and violence quickly erupted between human and replicant. Murdered and lynched in the streets, Human Supremacist movements used the Replicant Registration database to hunt down and kill replicants.[2]

In 2022, a human named Ren Dus was responsible for detonating an EMP over the West Coast of the United States, knocking out all power and corrupt data storage, as well as crippling stock markets and causing food shortages worldwide. This event became known as the Blackout and most people at the time blamed replicants for the event.[2]

At the same time, two Nexus-8 models Iggy and Trixie caused an explosion that would destroy the Replicant Registration database, allowing all remaining Nexus-8 models to blend in or go into hiding.[2]

Because of the Blackout and violence associated with it, governing authorities placed an indefinite ban on all replicant production in 2023. By this time, because of their pre-programmed 4-year lifespans, all Nexus-6 models expired and Nexus-8 replicants - now to be retired by law - went into hiding.[2]

Reclusive genius Niander Wallace was able to take over the remnants of a bankrupt Tyrell Corporation as a direct result of the deemed failure of the Nexus-8 series.[2]

Alexander Selwyn, with the Canaan Corporation, illegally continued production of Nexus-8 replicants as late as 2027. These replicants were highly obedient.[3]

Although doomed to be hunted for the rest of their lives, some Nexus-8 replicants still were part of extremely important events after the prohibition. After fleeing Los Angeles together, former Blade Runner Rick Deckard and prototype Nexus-7 model Rachael conceived a child together. This child was born in 2021, causing the death of Rachael and necessitating a plan to keep it safe from those who would want to experiment on it. Deckard went into hiding, but the child was taken care of by Nexus-8 replicants Freysa Sadeghpour and Sapper Morton, veterans of the war on Calantha and important members of a growing replicant resistance movement.[4]

To prevent knowledge of the child reaching the rest of the world, Sapper Morton sacrificed himself to retirement by Nexus-9 Blade Runner K when the latter arrived at his farm on the outskirts of Los Angeles.[4]

Ocular implants on a Nexus-8 (Calantha).

Trixie about to be assaulted by humans.

Ren, the human who triggered the EMP. 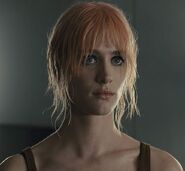