The Nexus-9 was the first line of replicants created by the Wallace Corporation after acquiring the rights from the bankrupt Tyrell Corporation in 2028.

The Tyrell Corporation was responsible for the creation, manufacturing, and selling of replicant technology since the earliest Nexus models were produced. In 2019, a rogue Nexus-6 replicant named Roy Batty killed the head of the corporation, Eldon Tyrell. This caused the next variant, the Nexus-8, to be rushed onto the market in 2020.[1]

Nexus-8 replicants had open-ended, natural lifespans and were used for Off-world warfare and tasks humans did not want to do on Earth. Anti-replicant sentiment led to human supremacist movements and, with the use of the Replicant Registration database, murder of replicants became a regular occurrence. In the Blackout of 2022, all records related to replicants were mysteriously erased, allowing Nexus-8 replicants to blend in with society. Shortly thereafter replicant technology was outlawed and the retirement of all Nexus-8 models was mandated. This sent the Tyrell Corporation into bankruptcy, allowing Niander Wallace to acquire it in 2028.[1]

In 2023, the governing magistrates legislated an indefinite prohibition on replicant production by the Tyrell Corporation. This led to the decommissioning of the Nexus-6 and Nexus-8 replicants. Unlike the Nexus-6 which did not live past its programmed 4-year lifespan, the Nexus-8 is characterized by a natural, indefinite lifespan. As a result, Blade Runner units were requested to retire any Nexus-8 replicants blending in with society.[1]

Replicant technology was prohibited after the Blackout, since the restraints Tyrell had placed into their models were deemed ineffective after the Nexus series proved to be rebellious. Niander Wallace, after acquiring the Tyrell Corporation for his own use, developed in secret new replicants that would obey. These would be the Nexus-9, and in 2036 Wallace demonstrated their obedience in front of the magistrates of Los Angeles by ordering an unnamed Nexus-9 to choose between his own life or that of Wallace's. The result was the replicant cutting his own throat. The prohibition was therefore rolled back and the replicants allowed back into the workforce and society.[2]

Unknown to anyone but Niander Wallace Jr., by 2049, supposedly all replicant Blade Runners created by Wallace Corporation were implanted with special memories, memories which centered on these Blade Runners being beaten and humiliated by certain individuals. The encoded "individuals" in these memories were people who Wallace Jr. considered potentially dangerous to the company's welfare should they decide to "betray" Wallace Jr. or the company. If such a case were to occur, Wallace Jr. could activate the implanted memory to trigger a Blade Runner replicant into killing these undesirable individuals.[3]

A Nexus-9 cuts himself

Luv in the presence of Wallace and Deckard 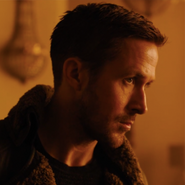