"You wake up one day and find it’s all been a dream, or you wake up and discover you’ve been asleep all the time and the nightmare is real. I didn’t know what it was. I didn’t know who I was. A cop dangling on the short end of the stick or a Rep whose memory banks had run out."[src]

"Last time I had a '3' was when some hooker vomited thunderbird on Bryant's desk, and yours truly led the clean up crew. A year and a half on the job and it was still the dirtiest work I'd seen."[src]

History with the LAPD[edit | edit source]

In 2019, Ray McCoy was a rookie Blade Runner for the LAPD, the newest one recently promoted but still not a full-fledged Blade Runner. He lives with his dog Maggie in apartment 88F. McCoy also pilots a spinner, able to quickly navigate Los Angeles until he is framed by his superior Lieutenant Edison Guzza, where then his spinner is confiscated by the LAPD.

McCoy's relationship with fellow officers range from amiable to competitive. McCoy is on good terms with the lab analyst Dino Klein as well as Jack Walls, the gun range officer. When it comes to fellow Blade Runner Crystal Steele, McCoy has a sort of rivalry in who can close cases faster. There appears to be sexual tension present between them, indicating a past relationship or fling.

Around Los Angeles, McCoy has history with several inhabitants. Murray and Mia seem to know McCoy and indicate prior meetings. The same is true for Howie Lee and his Chinese restaurant. McCoy also seems to have visited Early Q's and met with the owner at least once prior to the events of the game, in addition to his bouncer Hanoi.

McCoy is sarcastic and witty; evident by his interaction with the people of Los Angeles and through his in-game narrations. While veteran Blade Runners like Rick Deckard and Crystal Steele are apathetic and detached from those around them, McCoy is lively, naive, and overall kind to those he meets. He is not afraid to get tough when the situation demands it, and can interrogate properly. He is also well-versed in administrating Voight-Kampff empathy tests, which he can decide to do or not do at several points during his investigation.

McCoy's name may have been partly inspired by the expression "the real McCoy", especially in relation to the game's question of whether Ray is human or a replicant.

"I was just finishing up my twelfth hour on patrol when I got the call. Welcome relief considering that the most action I had seen all night was a schizoid grandmother doing the shimmy in her underwear in the second sector."[src]

Behind the scenes[edit | edit source]

"Welcome to the Blade Runner Unit, rookie–hope you're up to the job. Word is,you're a good man to have around, but you know how things are around here–actions speak louder than words. You'll get a retirement bonus for every Rep you bring down, but kill a civilian and your career is over."

Similar to Deckard's identity in the Director's Cut and Final Cut of Blade Runner and Blade Runner 2049, it is left ambiguous whether Ray McCoy is a human or a replicant. However, there is evidence that supports both sides and a case can be made either way:

McCoy is a replicant[edit | edit source] 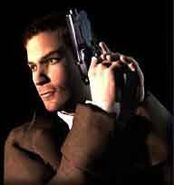 Ray McCoy in the kipple.
Add a photo to this gallery
Retrieved from "https://bladerunner.fandom.com/wiki/Ray_McCoy?oldid=14103"
Community content is available under CC-BY-SA unless otherwise noted.