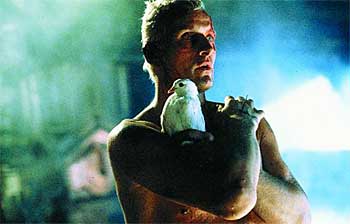 There is a rich subtext of religious allegory in Blade Runner.

Eldon Tyrell has the appearance of a living god from within a pyramid above the clouds that exudes wealth and power. This self-image is reinforced when Tyrell assumes the role of the gods by dimming the sun on command. Given the replicants' superhuman abilities, they are created by Tyrell and fall from the heavens (off-world) makes them analogous to fallen angels.

Roy Batty shares many similarities in this context with Lucifer as he seeks an audience with Tyrell using J.F. Sebastian who shares the replicants' "accelerated decrepitude". This connection is also apparent when Roy deliberately misquotes William Blake, "Fiery the angels fell..." (Blake wrote "Fiery the angels rose..." in America, A Prophecy). Zhora makes use of a serpent that "once corrupted man" in her performance. Nearing the end of his life Roy creates a stigmata as he transitions into a Christ-like figure who provides salvation to Deckard. Upon his death Roy's soul ascends into the heavens in the form of a dove; which appears to fulfill Tyrell's premature metaphor of the Prodigal Son .

Retrieved from "https://bladerunner.fandom.com/wiki/Religion?oldid=11980"
Community content is available under CC-BY-SA unless otherwise noted.