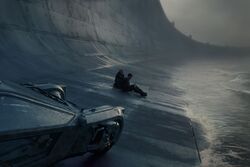 The Sepulveda Sea Wall was located in Los Angeles.

Following a major tsunami in the year 2025, construction of the Sepulveda Sea Wall was commissioned, with some replicants being illegally employed for the project.[1]

The Sea Wall was the location of LAPD Blade Runner K's final confrontation with Luv and the Wallace Corporation over the possession of fugitive Rick Deckard.[2]

On the way to the Off-world colonies to torture Deckard on the whereabouts of his child and the location of the replicant resistance movement, Luv and a couple of escort spinners flew above the sea wall towards LAX, now a spaceport. K intercepted them and shot down all three vehicles, and engaged in a fight with Luv, leaving both replicants mortally wounded, when her spinner crashed where the wall met the ocean.[2]

The waves nearly destroyed the spinner and drowned Deckard until K finally overcame and killed Luv, saved Deckard, and swam back to the base of the wall before taking Deckard to his daughter.[2]

A VFX shot of Los Angeles and the imposing sea wall

K approaching Luv's spinner at the base of the wall