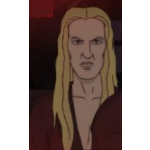 Has the appearance of a girl between 25-27 years old

Add a photo to this gallery

Has the appearance of a boy between 29-35

The head of a Nexus-6 rebellion group

Roy glaring at his girlfriend

Add a photo to this gallery

Deckard arrived at the Bradbury building and retired Pris. Roy showed up minutes later and began to play a cat-and-mouse game with him, Taunting and frightening him. This continued until Roy found Pris' body and burst into tears. After he collected himself, He began to taunt Deckard more violently, And actually broke two of his fingers as revenge for the deaths of Pris and Zhora. Then, Roy encouraged Deckard to join him in his violent outbursts after Deckard hit him with a pipe. Soon, Roy shoved a nail through his hand and made Deckard retreat to the rooftop. On the rooftop, Deckard made an attempt to escape Roy, But, Fell short clinging onto a girder extending off of the side of the building. Deckard, now trapped, Spent what he thought was the last moments of his life hanging off of the roof. His hands began to slip. After Batty mused about what it was to be a slave, Deckard began to fall. As he was about to plummet to his death, He spat at Roy. Despite this, Roy actually saves Deckard and places him on the roof. Moments later, As his 4- year lifespan begins to draw to a close, Roy tells Deckard about all the things he was privileged to experience. He smiles at Deckard then dies, Allowing a dove he was holding to fly away. And, This alone tells you that Roy is more of a human than Deckard and Deckard is more of a replicant than Roy will ever be!

I BELIEVE DECKARD IS A REPLICANT:

Ana (Mother is a replicant, Father is a possible replicant)

"I've seen things you people wouldn't believe! Attack ships on fire off the shoulder of Orion. I've watched C-beams glitter in the dark near the Tannhauser gate. All those... Moments... (Swallows) Will be lost...in time... Like, Tears in rain... Time... To die"

In loving memory of Roy Batty

In loving memory of Rutger Hauer

Both are gone, But will never be forgotten

Retrieved from "https://bladerunner.fandom.com/wiki/User:Lady_Dethklok?oldid=12529"
Community content is available under CC-BY-SA unless otherwise noted.