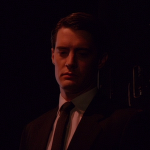 Hello, I'm an admin here in the Wiki! I am a huge fan of Blade Runner and Blade Runner 2049 as well as the novel Do Androids Dream of Electric Sheep?

Currently focusing on expanding articles from the Blade Runner films, primarily giving articles an in-universe point of view, with citations for everything while not favoring just one version of the film. I have worked on a little bit of Do Androids Dream of Electric Sheep? information, but I need to do a re-read. On that note, I am also aiming to have separate articles for the film and book continuities rather than clutter up singular articles with both. For example: film Deckard and book Deckard. For further clarification, this approach is similar to Wookieepedia's Canon and Legends style.

I do intend on incorporating info from the K. W. Jeter novels once I get around to them and cleaning up the 1997 game sections once I play it.

I'm hoping to have these renovations mostly done by the time Blade Runner - Black Lotus premieres, so there will be less to worry about when we need to start adding information from that!

Aside from this Wiki, I work mostly on the Twin Peaks and RoboCop Wikis, both of which I am also an admin.

Retrieved from "https://bladerunner.fandom.com/wiki/User:Special_Agent_Dale_Cooper?oldid=8147"
Community content is available under CC-BY-SA unless otherwise noted.