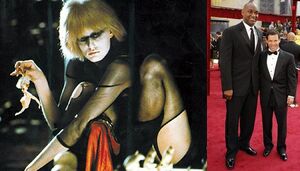 You may have heard there's a REMAKE in the works, but this is absolutely false (sigh or relief...). Fortunately for all fans of the original film and of cinema in general, Philip K. Dick precluded any remakes of the original film in the licensing agreement. So what's all the remake talk about? The real story is that the producers of The Blind Side have optioned the sequel and prequel books from Bud Yorkin, who was an executive producer on the original film.

The 1982 cult classic, directed by Ridley Scott and starring Harrison Ford, was set in a future- the year (2019- where man has created clones called replicants who are used for dangerous work. When they rebel on a space colony, replicants are banned and hunted down by policemen called Blade Runners.

“This is a major acquisition for our company, and a personal favorite film for both of us,” Alcon principals Andrew Kosove and Broderick Johnson said in a statement. "We recognize the responsibility we have to do justice to the memory of the original with any prequel or sequel we produce. We have long-term goals for the franchise, and are exploring multiplatform concepts, not just limiting ourselves to one medium.”

So there you have it. Based on the rather lackluster sales of both, chances are you have not read either the prequel or sequel books and if you haven't already probably will never get it around to it...unless there's a film made. So isn't this good news? In my opinion it's a great way to continue to enjoy this off-world AND to help introduce the original film to a new generation that yet to ponder its greatness...

Retrieved from "https://bladerunner.fandom.com/wiki/User_blog:Bchwood/Blade_Runner_sequel/prequel_in_the_works?oldid=3074"
Community content is available under CC-BY-SA unless otherwise noted.