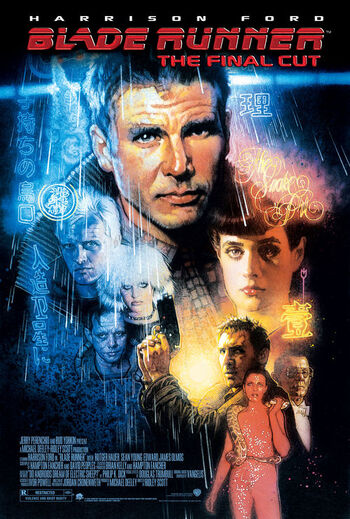 The version dubbed the "workprint version" is the oldest-existing cut of Blade Runner. This is an incomplete version of the film, as it had not yet been color-corrected or sound mixed and it lacked several parts of Vangelis' score. Ridley Scott stated that the workprint was "Something that was pretty rough, but close enough to what I was after to let a preview audience see." Thus, the cut was shown to preview audiences in Denver, Colorado and Dallas, Texas in March 1982.

This version was rediscovered in 1989 by Michael Arick, who initially believed it to be the international cut. It was screened the following year at the Los Angeles Fairfax Theater as part of a 70mm spring festival. During this screening is when it was discovered to actually be a surviving copy of the workprint. Because the workprint was closer to Ridley Scott's vision for the film than the theatrical cuts, Arick became interested in producing a reconstruction of the film, an effort that ultimately resulted in the 1992 Director's Cut.

The 1982 American and international theatrical versions released by the studio included a "happy ending" (using stock footage from Stanley Kubrick's The Shining) and a voice-over added at the request of studio executives during post-production after test audience members indicated difficulty understanding the film. Although several different versions of the script had included a narration of some sort, both Ridley Scott and Harrison Ford disliked the studio voice-over and resisted having it added to the film. It has been suggested that Ford intentionally performed the voice-over poorly in the hope it wouldn't be used,[1] but recent interviews contradict this.[2]

In an interview with Playboy magazine in 2002, Ford was asked (about the voice-over) if he "deliberately read it badly, hoping they'd drop it?". He replied "No. I delivered it to the best of my ability given that I had no input. I never thought they'd use it. But I didn't try and sandbag it. It was simply bad narration." He added, "I was compelled by my contract to do the narration. When I first agreed to do the film, I told Ridley there was too much information given to the audience in narration." Ford had suggested to Ridley Scott that they "take it out and put it into scenes and let the audience acquire this information in a narrative fashion, without being told it." Scott thought this a good idea. "When we got done, the studio said nobody will understand this fucking movie. We have to create a narrative. They had already thrown Ridley off the movie - they were over budget. So I was compelled by my contract to record this narration."[3] Ford is also quoted (in 1999 about the voice-over) saying: "I had no chance to participate in it, so I simply read it. I was very, very unhappy with their choices and with the quality of the material. I contested it mightily at the time. It was not an organic part of the film.'"[4]

This is the version of the film widely available on Home Video throughout the 1980s and the cut of the film that was distributed on a widescreen LaserDisc by Criterion with supplementary material.

In 2000, Harrison Ford gave his view on The Director's Cut of the film saying, although he thought it “spectacular” it didn't “move him at all”. He gave a brief reason: "They haven't put anything in, so it's still an exercise in design."

Note: The San Diego sneak preview version has been omitted, as it is unclear what two scenes were added. Otherwise, it is reportedly identical to the U.S. theatrical version.

* = This version is additionally edited for violence, sexual content, and strong language.

Retrieved from "https://bladerunner.fandom.com/wiki/Versions_of_Blade_Runner?oldid=13657"
Community content is available under CC-BY-SA unless otherwise noted.