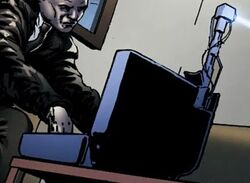 The Voigt Empathy Test was originally developed by the Pavlov Institute in the Soviet Union after some T-14 androids had been able to remain undetected for up to a year. In around 1989/2018, the Voigt scale was altered by Lurie Kampff, establishing the Voight-Kampff Altered Scale as the primary method of testing.[1]

The test originally appears in Do Androids Dream of Electric Sheep?, then in the film adaptation, Blade Runner, where its spelling is slightly altered to Voight-Kampff, although the original spelling is retained in continuation novels written by K. W. Jeter.

Retrieved from "https://bladerunner.fandom.com/wiki/Voigt-Kampff_test?oldid=12788"
Community content is available under CC-BY-SA unless otherwise noted.