Zhora, known by her stage name Miss Salome, was a Nexus-6 replicant who returned to Earth with Roy Batty in search of a way to extend her lifespan.

Zhora, like other replicants, was created to be of use in Off-world Colonies. She specifically was bred for a kick murder squad, retrained for political homicide on February 9, 2018.[1]

She joined Roy Batty and the other replicants to travel back to Earth in search of longevity and the meaning to her life after learning about her short lifespan as a replicant. After taking an Off-world pilot's vessel, Roy flew the replicants to earth to undergo their mission.[1]

After arriving on Earth, the group was immediately hunted by the Los Angeles Police Department and were forced to separate and live on Earth while searching for their creators.[1]

After escaping from the police, Zhora occasionally met with Leon and Roy at Leon's apartment at the Yukon Hotel to discuss plans concerning their mission.[1]

Zhora eventually found work as an exotic dancer at The Snake Pit and gathered enough finances to purchase an animoid snake. Zhora remained a dancer while assisting Roy with their mission for more life.[1]

In his scanning of photos obtained from a search of Leon Kowalski's apartment, Deckard found Zhora and identified a custom tattoo of a snake on her neck, tying it to a snake scale he found in Leon's bathtub.[1]

After a performance at Taffey's one night, Zhora was approached by Deckard disguised as a representative from the American Federation of Variety Artists from the committee on Moral Abuses. With Zhora allowing him to follow her to her dressing room, Deckard explained how the management from his committee had been taking liberties with the artist from her club.[1]

Deckard asked her questions about her activities at Taffey's while Zhora put down her artificial snake and got ready for a shower. Before she entered the shower room, Deckard asked if he could inspect her dressing room, claiming that there could be holes created by men who would peep to see Zhora nude. Zhora allowed the inspection to proceed while she showered.[1]

Zhora, however, saw through his ruse and devised a plan to kill him before he could retire her. After drying her hair and putting on her boots, Deckard asked Zhora if her snake was real, which Zhora denied. Zhora returned to the dressing room and asked Deckard to dry her while she put on her bra.[1]

As Deckard was about to dry Zhora's back, she attacked him by striking him with her elbow and striking his face with her palm. Zhora put on a clear jacket and knelt down to Deckard on the floor and began to strangle him with his necktie. Zhora, however, did not have time to kill him because several other dancers entered the room, causing Zhora to flee while Deckard chased her.[1]

Zhora fled the club and Deckard pursued her into the streets, where she attempted to hide among the crowds of people. Zhora first ran down the street and past the vast of pedestrians. Deckard, while on her trail, had multiple opportunities to retire her but after taking aim with his gun, he forfeited and continued to chase her, due to Zhora's distance and the walking pedestrians and vehicles.[1]

After running past a street bus, Zhora ran down a set of stairs leading to the subway and hid against the wall. Deckard lost track of her for a moment and recaptured his sights after jumping off the bus and moving towards the subway. Noticing Deckard aiming at her and about to fire, Zhora fled once again away from the subway and back into the streets.[1]

While running, Zhora realized that the street she chose to run down had fewer people than the streets before. Seeing his opportunity, Deckard took aim and yelled for pedestrians to stand clear. Deckard opened fire and missed his first shot. In fear for her life, Zhora continued to run while Deckard was still on the chase. He shot a second time and nearly hit her.[1]

Zhora then attempted to lose Deckard by running through glass display windows of clothing stores. Seeing that Zhora's destination was narrow and clear, Deckard shot again with the shot hitting her back and through her chest.[1]

Stumbling, Zhora crashed through more glass windows and collapsed to the floor. Injured and determined to escape, Zhora got up and attempted to run once again. Deckard then shot her back once more, causing her to crash through the final set of glass windows onto the street to die. As backup arrived, a passerby found the snake tattoo on her neck, one of the clues that Deckard used to track her.[1]

Zhora had the appearance of a tall woman with brown hair reaching down to her neck. She, like Pris, was flexible and athletic in form and appearance. She had combat experience and was able to defend herself if needed. Zhora's appearance was voluptuous in form, making herself seem perfect for dancing or working at The Snake Pit.

Zhora is portrayed by Joanna Cassidy, who was cast partially because she had a pet Burmese python named Darling, which was used as Zhora's snake in the film. She was also cast largely because of her physicality.[2] For Zhora's death scene, stunt performer Lee Pulford stood in for Cassidy. Cassidy's head was digitally placed over Pulford's for the release of Blade Runner: The Final Cut.

In the shooting script, Zhora is not killed by Deckard's gunshots. Instead, she reaches the street and is hit by a bus.[3] This manner of death is kept in the novelization.

Zhora's dance was originally to be filmed, but ultimately did not make it past choreography and a makeup test.

The character is loosely based upon the Do Androids Dream of Electric Sheep? character, Luba Luft.

Off-world: The Blade Runner Wiki has 11 images related to Zhora. 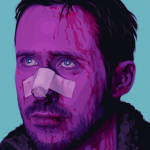